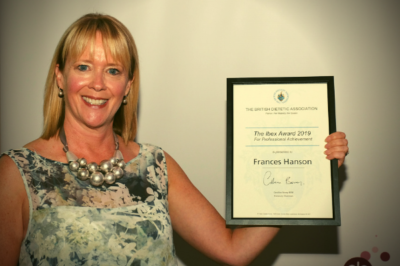 We thank individuals who have made significant contributions to the profession either locally or in a dietetic specialism. This takes the form of the Ibex, which is an honour for Professional Achievement.

How to nominate someone for an Ibex

Nominations for the Ibex Honour should be made to the Honours Committee on the nomination form below and supported by at least five signatures of Full Members of the Association, or by a decision of a Branch, a Specialist Group, or a Board of the Association.

Nominations will be considered all year round.

The individual concerned should not be approached or be made aware of the nomination.

Nominators should provide evidence to support the nomination under the following headings. The nominee will:

Please download the Ibex Nomination Form and email a completed copy to honoursawards@bda.uk.com.

The BDA Board of Directors will make the final decision on conferring all Honours at its May meeting at the latest (except the Roll of Honour, which is considered throughout the year). The discussions will be confidential and no further correspondence will be entered into. Successful nominees will be informed, following which notice will appear in Dietetics Today. Honours will normally be presented at the BDA Awards Dinner or another appropriate event if this is not possible.

Have you considered applying for any of our new BDA Awards?

If this honour is not the best fit, consider:

Roll of Honour recognises and rewards BDA members who have gone above and beyond to make a significant contribution to a defined piece of work or activity in the past year. The Roll of Honour is awarded by the BDA Board of Directors throughout the year. Nominations can be received at any time of year.

Fellowship is the BDA’s highest honour. It is given in recognition of over ten years of committed and inspirational service to the BDA and dietetic profession at a national or international level.