The risk of developing a range of illnesses, including heart disease and certain cancers, increases with any amount of alcohol you drink on a regular basis. However, if you keep within the recommended limits, you can reduce this risk.

The Department for Health recommends that if you are a regular drinker, i.e. you drink most weeks:

If you have one or two heavy drinking sessions, there are increased health risks, whether from accidents or injuries or from increasing the possibility of developing certain diseases. 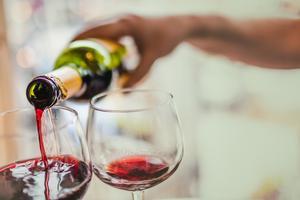 In the past, moderate drinking was associated with health benefits, but recent research has shown such benefits to be much less than previously thought and may only be significant among certain groups of people.

How do units of alcohol work?

For example, one unit is about equal to:

There are one and a half units in:

Remember, many wines and beers and ciders readily available in bars and restaurants are stronger than the more traditional ‘ordinary’ strengths so it may be worth asking the strength if you are not familiar with the drink. When drinking out, wines are often offered in 175ml or 250ml servings and if you are drinking at home you are more likely to pour yourself a more generous amount than a standard pub measure.

A more accurate way of calculating units is as follows. The percentage abv of a drink equals the number of units in one litre of that drink.

Drinking too much - alcohol effects

Binge drinking (more than four units at any one time) and drinking to get drunk, common among young adults, is bad for your health and should always be avoided. In other words you should not save up all your units for the week and drink them all in one go. Studies have shown that young female British women have amongst the highest intakes of alcohol in the world.

Binge drinking can cause a range of social and health issues, for example violent and unsafe behaviour, and can often result in vomiting, collapse and seizures which can be potentially life threatening.

Everyone has different tolerances, however those who feel they can drink large amounts without feeling unwell are still causing the same damage to their bodies and put themselves at the same risk of social and health problems.

Many people who have alcohol-related health problems aren’t alcoholics. They’re people who have regularly drunk more than the recommended levels for some years. If you do drink too much, you should avoid any further drinking for at least 48 hours to give your body a chance to recover.

How many calories are there in alcohol?

Be aware that alcohol is high in calories and so can contribute to weight gain. One gram provides seven calories (7kcal), compared with 4kcal per gram for carbohydrate and protein. One unit contains eight grams or 10ml of alcohol, which provides 56kcal. However other ingredients such as sugar, cream and fruit juice, can add more calories. Many people forget to include drinks when they are watching or recalling what they eat. It’s easy for these ‘liquid calories’ to add up quickly and unnoticed. Alcohol is also an appetite stimulant and can lead to overeating at mealtimes, late at night and even the next day.

To provide all the nutrients needed to maintain health and reduce risk of disease, a healthy balanced diet containing a variety of foods is needed. Alcoholic drinks lack most essential nutrients and vitamins so if these are providing most of the calories in the diet then there is a risk of nutritional deficiencies.

The practice of ‘saving’ calories from food for alcohol i.e. drinking it rather than eating to prevent putting on weight, could put you at risk of not getting all the nutrients your body needs.

Alcohol is also a diuretic, which means it makes the body lose more water than usual. When you drink it, it’s a good idea to drink water or other low-calorie soft drinks in between and afterward to avoid dehydration.

Practical tips on cutting down

If you want to try to cut down on the amount of alcohol you are drinking, here are some practical tips:

If are planning a pregnancy, you are advised to stop drinking alcohol altogether. It can reduce the ability to conceive, damage the unborn baby and may even lead to early miscarriage. If you have been drinking before you found out you were pregnant, you should stop drinking for the remainder of the pregnancy. However, try not to worry as it is very unlikely to have caused any harm, but you should stop drinking for the remainder of the pregnancy. If you are breastfeeding, occasional drinking, such as one or two units once or twice a week, is not harmful to your baby but drinking any more than this can cause problems. It’s best to avoid drinking alcohol just before a feed. This is because it can pass to the baby in small amounts through breast milk.

You should also take care or seek medical advice if you are ill or suffer from conditions such as diabetes, gastric ulcers, high blood pressure or depression or taking certain medication. If you are unsure, then check with your GP or pharmacist.

We understand not all parents will be comfortable with the word breastfeeding, and other words such as chest-feeding and body-feeding may be preferred. We have used breastfeeding here to make this sheet as understandable as possible to the widest audience.

We encourage dietitians and other healthcare workers to use the language that best suits each parent they support.

The BDA's commercial relationships with companies who manufacture breastmilk substitutes

For more information and ways to monitor and reduce your intake visit: www.alcoholconcern.org.uk, www.drinkaware.co.uk, www.nhs.uk