Plastic not so fantastic 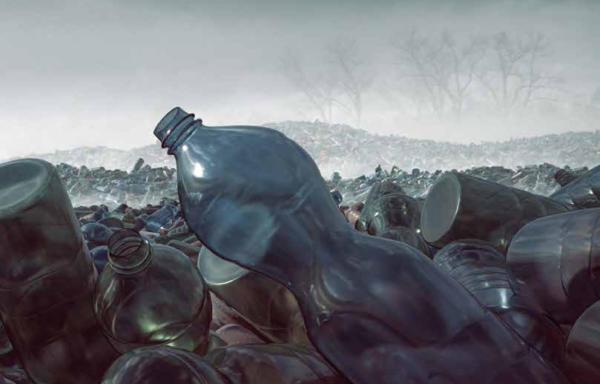 Barely a day goes by when the issue regarding our use of plastics is not in the news, be it plastic pollution of our oceans, recycling or plastics in our food and drink. There is increasing concern and attention around the plastics that we as humans consume in our day-to-day lives.

The National Geographic produced an article warning that we “eat thousands of bits of plastic every year”. These tiny fragments of plastic which contaminate our food are known as microplastics and come from contamination of food via air, water and soil, and can be present in both vegetable- and meat-based foods (1 - see references below).

The scale of the problem appears vast. In a recent study in The Journal of Environmental Science and Technology, it was estimated that for 15% of caloric intake, Americans consume anywhere between 39,000 and 52,000 microplastic particles, and when we consider the addition of any particles in the air that we breathe in, this increases to between 74,000 and 121,000 particles. Certain eating habits also appear to increase the amounts of plastic consumed.

For example, drinking bottled water adds 90,000 microplastic particles annually, whereas consuming tap only adds 4,000 (2). It is reported that the levels of plastics is rapidly increasing in the world, largely due to the increasing population and resulting increase in industry, agriculture and general use of plastics for everyday items. The very desirable attributes of plastics which lead them to be so widely used is unfortunately one of the main reasons why, when these are disposed of, they then become such virulent environmental polluters.

Their high tensile strength, durability and resistance to corrosion results in these items failing to biodegrade in the environment, instead fragmenting into smaller and smaller parts, resulting in microplastics and smaller. The term microplastic refers to a piece no more than 5mm in diameter (3).

We have increased our production globally of plastics from 1.5 million tonnes in 1950 to 335 million tonnes in 2016, despite calls for us to be reducing the amount of plastic, particularly single-use plastics. This pollution is most commonly seen in marine environments; however, we are now also observing microplastic pollution in soil and air pollution.

Approximately 80% of the debris pollution in the ocean, 40-80% of which is plastics, is from land-based sources. This equates to 6.4 million tonnes according to the United Nations and 10% of all globally produced plastics ends up in our ocean environments (3).

Plastics are made of cross-linking monomers with high thermal and dimensional stability, which means they are highly resistant to both heat and mechanical degradation. In addition, many plastic products have additional chemicals added to them to impart different desirable properties. For example, flame retardants, stabilisers, pigments or fillers are often added for flexibility, strength and colour (3).

Additionally, plastic contaminants are able to absorb other pollutants that may be present, for example pesticides or heavy metal toxins, and 78% of polluting chemicals which can cause toxic harm to the environment have the ability to be absorbed onto plastics (3).

Due to the fact that these plastic contaminants do not degrade, and cannot be digested, it is common for concentrations of contaminants to increase up the food chain; predators often appear to have higher levels of contamination than herbivories at the bottom of the food chain. This can be seen particularly in cetaceans (whales, dolphins and porpoises), turtles and predatory fish in ocean environments as one of the main exposure routes is ingestion, which includes consuming prey, and also passive water filtration.

In animals, once the microplastic has been ingested it usually remains within the stomach and digestive tract and can be absorbed over the mucous membrane and enter the circulatory system to be deposited in tissues throughout the body. This can cause adverse effects though a number of routes, including mechanical damage through the movement of the microplastic across the cell membranes, and also potential chemical damage (4).

It has been noted that plastics contamination occurs in both farmed and wild stocks of fish and seafood, mostly due to plastics being present in water sources in farmed environments, and feed for farmed fish already being contaminated with plastic pollutants (4).

Shellfish and fish are most often contaminated with plastics, particularly cod, mackerel, pilchard, sea bass, mussels, oysters and crustaceans including crabs and prawns. Looking at prawns in particular, an individual will consume on average 175 particles per year, or an average of 3.7-17.7 particles per individual prawn. As suggested above, usually the digestive tract of seafood is not consumed, but where the whole animal is eaten as is the case for mussels and some small fish, this presents a greater risk of exposure for individuals to consume microplastics (4).

Within Europe, high consumers of seafood are predicted to consume up to 11,000 microplastic particles per year. Once ingested in the human digestive tract, it is possible for these microplastic particles, particularly if the particle size is between 0.16-150µm, to be absorbed over the mucosal membrane. Within the digestive tract, Peyer’s patches and lymphatic tissue are believed to be the main site of absorption. It was observed in rodent studies that larger particles remained in the lining of the gastrointestinal tract, but smaller particles were able to be transported via the gut tissue (5). It has been observed that very fine particle contamination is able to cross the cell membrane, blood-brain barrier and also the placenta.

Of recent interest in the microplastics debate was the presence within teabags. In a study conducted by Hernadez and colleagues in 2019, a teabag comprised of plastic material was brewed at 95°C. It was observed that the small particles seen on the surface of the teabag prior to brewing were removed and entered the liquid. It was reported that 2.3 million micron sized particles (between 1-150µm) and 14.7 billion submicron particles (<1µm) leaked into the water, or 16µm in total.

In addition to the above, high levels of microplastics have also been found in other non-aquatic food sources, such as honey and beer (8).

It has been suggested that microplastic contamination is linked with a wide variety of human health concerns, including cancer, reproductive effects, digestive problems, respiratory problems and skin irritation.

Particularly in finer contaminants, these have been observed in both animal and human studies to promote oxidative stress, cell damage, promote inflammation and impair energy metabolism. This can either be due to primary consumption of the microplastics, for example, from water sources, or secondary by consuming contaminated fish for example (7).

There may be an impact on the health of the bowel in humans, even though as little as 0.2% of ingested particles will be absorbed across the mucosal membranes. In people with inflammatory bowel disease this can increase to 0.45% due to increased gut permeability. These may cause issue due to the increased risk of intestinal blockage and inflammation caused by tissue abrasion.

Additionally, microplastics in the lumen may have the ability to interact with fluids in the bowl. Large proteins may be absorbed on the surface of the microplastics and this could lead to an alteration of the immune system of the gut and therefore increase localised inflammation. This could then lead to a cycle of increased gut permeability and further microplastic absorption (8).

Additives added to plastics also have a growing evidence base to suggest that they may have the potential to cause harm to human health. Similarly for the transfer of plastics, these chemicals enter the food chain at low trophic levels and then increase in concentration up the food chain, so could potentially be ingested in high amounts by predators or humans.

These additives may have a wide variety of health consequences including immunological responses, peroxisome proliferation, changing to gene expression and neurotoxic effects (8). Specifically, substances that are common additives to plastics such as bisphenol or phthalates are already know to have deleterious effects on human health, including disruption of endocrine processes if ingested by humans, particularly if these enter the human system through ultra-fine particles and can be transported to tissues such as the liver, kidney or brain (9).

It is possible that these microplastics may also act as a vector for parasites and pathogens, increasing the risk of food poisoning and pathogenic illness8. They have also been known to transmit parasites. It has been observed that plastic debris contains pathogens such as E. coli, and often these are different to the native bacteria where the plastic debris was located, which may indicate that these plastics act as an independent movable habitat and breeding ground for bacteria, and bacteria may be able to colonise particles and enter the human gastrointestinal system (9).

It has also been suggested that ingestion of microplastics, both from food sources but also in beauty products and toothpastes, can be linked with skin damage and alteration of the chromosomes causing fertility problems, obesity and increasing the risk of cancers; for example, in women estrogenic mimicking chemicals can cause breast cancers (11). The build-up of these have also been linked to an altered immune response in animal samples (12).

It has also been noted that with a build-up of microplastic waste in the body, this can lead to oxidative stress via free radical generation. In a study conducted in mice, it was noted that there was an accumulation of particles in the liver, kidney and gut of the mice, increasing the oxidative stress, altering lipic and carbohydrate metabolism, and demonstrating a neurotoxic effect. Whilst this was a study conducted in mice this does raise concerns about the effects on these tissues in humans if contaminants were to build up (8).

As can be seen, there is growing evidence to suggest that there are a multitude of human health concerns related to microplastics. It is reported that, in reality, over 90% of ingested microplastics are excreted via faecal matter (10).

Many of the studies above note the potential human effects, but much of the data is currently extrapolated from animal or in vitro studies, so the actual effects on human health remain unclear. All studies note that further research needs to be conducted to fully understand the health implications of plastics. One issue raised is that the heterogeneity of microplastic contamination makes it very challenging to establish direct causal links between ingestion and health consequences.

It has been suggested that in reality, due to the ubiquitous nature of plastics used in our everyday lives, exposure through food and drink ingestion is relatively minor compared to other sources, for example, in beauty products and clothing. It has been suggested that this focus on food contamination is in reality pulling focus away from the real issue, which is the overall use of plastics and the disposal of these in our waste system (13).

So, the real question is therefore: is it a problem there is plastic in our food? We can say with a high degree of certainty that it is indeed there, in increasing volumes, and we are all consuming it at various levels. We can try to take steps to reduce the plastic we consume through reducing seafood, particularly crustaceans and predatory fish, or buying loose leaf tea, or even just sticking to tap water and non-plastic bottles.

The proposed health implications are worrying, and the evidence seems to be growing that plastics can cause us harm, and at the very least, it is not an appealing thought to be eating plastic pollution. But we need to be looking into further, large scale studies to track consumption and health consequences of this.

Alternatively, we can all work towards reducing the use of plastics in our daily lives to reduce the amount entering our food in the first place. I have switched to bamboo straws, reusable cling film and even washable make up wipes to start doing my bit! And remember, always reuse and recycle and as a planet, stop using the ocean as our collective dustbin.

Annabel works with young people with eating disorders in York and Scarborough.