Complementary Feeding: The Foundation To A Healthy Start 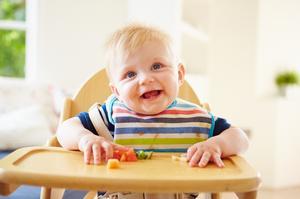 Complementary feeding (CF) describes the period when foods other than milk are introduced to the infant diet. The World Health Organization (WHO) recommends CF should begin “when breast milk alone is no longer sufficient to meet the nutritional requirements of infants” and ‘‘other foods and liquids are needed, along with breast milk’’.(1 - see references)

In this recommendation, WHO includes infant formula as a complementary food. However, for the purpose of this article, complementary foods (CF) are defined as food provided to the hitherto exclusively milk-fed (breast- or formula fed) infant.

For most infants, exclusive breastfeeding can meet nutritional needs until about six months of age. After this, complementary foods are recommended because infant micronutrient supply does not meet requirements. CF is an important stage both nutritionally and developmentally, but is also a transitional period from milk to family foods.2, 3

This article summarises important aspects of CF in the first year of life in healthy term infants in the UK to provide context for the BDA Paediatric Specialist Group (PSG) position statement.4 Findings from the Scientific Advisory Committee on Nutrition (SACN) report on ‘Feeding in the First Year of Life’ are summarised and key changes highlighted2.

This article will focus on four main areas of CF:

Appropriate age and timing of introduction

In 2003, the UK Department of Health (DH), adopted the WHO Global Infant Feeding Recommendation which advised exclusive breastfeeding for the first six months of life as optimal for most infants.5

However, infant feeding choices are influenced by multiple factors, including cultural, socio-economic and lifestyle and healthcare professionals (HCPs) consistently report that parents experience difficulties adhering to the DH guidelines. For example, the UK Diet and Nutrition Survey of Infants and Young Children (DNSYIC, 2011) reported that 42% of infants had received solid foods by four months of age and the Scottish Maternal and Infant Survey (2017) reported more than half (54%) had received solid foods before six months of age.6, 7

It has been suggested that there is a “critical window” for the acceptance of solid foods between four to six months. However, SACN concluded that this is not supported by experimental evidence and recommended that most infants can start solids at around six months, having achieved developmental readiness (Table 1).2

Early introduction of solids (before three months) has been linked to increased risk of obesity. However, evidence from studies are largely observational and cannot define causality. Overall, studies have found no difference in obesity risk for infants introduced to solids at four-to-six months compared with six months as reviewed by Moorcroft (2011).8 Randomised controlled trials have found that solid foods displace energy from breastmilk and do not lead to higher energy intake.8-10 11, 12

Based on available evidence, the PSG recommends that most infants should be introduced to solids at about six months of age. However, each infant should be managed individually and some may be ready for solid foods earlier. Infants perceived to be ready and who show signs of developmental readiness can be introduced to solids earlier, at around four months, but not before 17 weeks.

After six months, infant iron stores diminish and, even with up-regulation of intestinal absorption, the amount of iron provided in breastmilk is no longer sufficient. Additional demands for growth and blood volume expansion means that dietary requirements for iron increase.13

Vitamin D is important for bone health and is synthesised in the skin on exposure to sunlight. It can also be obtained from foods or dietary supplements. The DNSIYC found that a small proportion of UK infants (6%) may be deficient 6. These were mostly breastfed infants. The UK DH recommends that all infants from birth to one year of age who are exclusively or partially breastfed should be supplemented with 8.5-10mcg vitamin D/day. Infants taking over 500mL/day infant formula do not require supplementation.14

The DNSIYC found that vitamin A consumption was above the EAR in most UK infants. SACN concluded that insufficiency of vitamin A is not likely to be a public health concern for this age group.

The PSG recommends a wide range of foods from all the major groups, including iron-containing foods, should be introduced from the beginning of CF. Caregivers should follow DH guidelines for vitamin supplementation and should check if they qualify for free Healthy Start vitamin drops and vouchers to purchase milk, fruit and vegetables.

Acceptance of new tastes and textures is central to the establishment of a healthy diet and can be encouraged by the inclusion of a wide variety of foods from the beginning of CF. Bitter tasting vegetables may prove difficult to accept in some infants. Studies have found that offering these early and repeatedly may encourage acceptance15.

Responsive feeding (RF), when a caregiver responds appropriately to an infant’s cues of hunger or satiety, can help the establishment of a healthy dietary pattern.16 RF avoids over-controlling feeding practices, such as pressuring children to eat, and discourages indulgent and uninvolved feeding styles, in which the caregiver feeds the child in response to signs of distress or in a disorganised manner. If managed well, RF can minimise the risk of over-feeding or the development of fussy eating. Interventions to promote RF have shown success in achieving healthy diets and reducing the risk of overweight.17, 18 The PSG recommends that complementary feeding should be carried out in a responsive manner.

Baby led weaning (BLW), where the infant is encouraged to self-feed with finger-foods has gained popularity.19 This approach is suggested to be less coercive and enables infants to regulate their energy intake. A study in the UK found that BLW led to earlier self-feeding, less food fussiness and greater food enjoyment. BLW did not lead to lower energy or micronutrient intake and was not associated with increased risk of obesity.20 Available evidence is currently insufficient to support benefits of BLW over traditional CF.

High quality evidence supports that the timing of the introduction of gluten into the diet is not associated with increased risk of developing coeliac disease. Available evidence also indicates that allergic foods such as peanuts, hen’s eggs and fish can be introduced from around six months of age and should not be differentiated from other solid foods2, 21. Exclusion or delayed introduction of potentially allergenic foods, beyond the age of six months, may increase the risk of allergy.22

A substantial body of evidence, including the Learning Early About Peanut Allergy (LEAP) study and the Eating and Tolerance (EAT) study, found that earlier introduction of potentially allergenic foods was protective against allergy in high risk children.23 24 However, the joint SACN-COT statement concluded that there were insufficient data to support a recommendation for the introduction of potentially allergenic foods before six months22.

The PSG committee reiterates advice from SACN for the introduction of allergenic foods such as peanuts or peanut containing, hen’s egg, gluten-containing and fish from around six months of age. These should be given alongside other complementary foods whilst breastfeeding continues. The introduction of these foods should not be delayed to beyond six-12 months.

Caregivers should not continue to give a food if they suspect an allergic reaction and should seek medical attention. For infants at high risk of food allergy, e.g. those with eczema or who have an existing food allergy, medical advice should be sought before starting CF. For further information, refer to British Society for Allergy and Clinical Immunology and BDA Food Allergy Specialist Group.25

CF is an important period when infants’ diets are expanded to meet needs for growth, development and activity that can no longer be met by milk alone. It is also an important time for the establishment of healthy dietary habits. Dietary practices established here can be taken forward to later childhood and into adult life where they can influence both short- and long-term health.

17 Redsell SA, Edmonds B, Swift JA, et al. Systematic review of randomised controlled trials of interventions that aim to reduce the risk, either directly or indirectly, of overweight and obesity in infancy and early childhood. Matern Child Nutr. 2016;12(1):24-38.

21 Ierodiakonou D, Garcia-Larsen V, Logan A, et al. Timing of Allergenic Food Introduction to the Infant Diet and Risk of Allergic or Autoimmune Disease: A Systematic Review and Meta-analysis. Jama. 2016;316(11):1181-92.

22 SACN/COT. Assessing the health benefits and risks of the introduction of peanut and hen’s egg into the infant diet before six months of age in the UK. 2017.