Why do we go to conference?

Our Public Affairs and Policy Manager Dominic Armstrong fills us in on the Labour and Conservative Party Conferences and what they mean for BDA members. 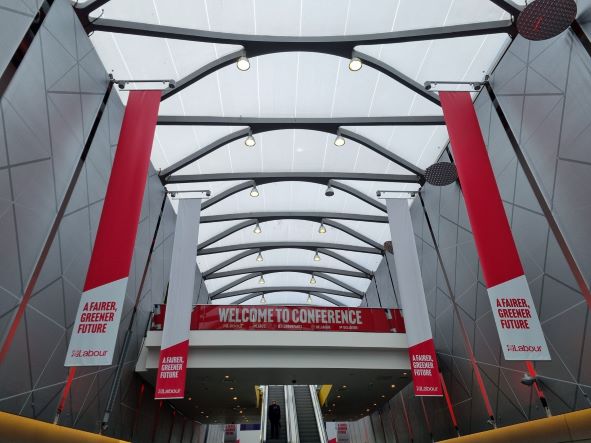 It was a packed, standing room only, Avanti train on Saturday 24 September that took a combination of public affairs people, Labour supporters, journalists, tourists and football supporters up the West Coast Mainline to Liverpool. All but the latter two were there for the Labour Conference 2022.

The annual event is an opportunity for the party to lay out its vision for the next year, and for public affairs people, like myself, to try and negotiate our way into conversations with Shadow Ministers, MPs, and Labour staff in the hopes of pushing forwards the issues facing our members and organisations.

Some people outside of politics often question the point and cost of party conferences - why not just announce policies instead of spending thousands of pounds booking out conference centres and hotel suites? To a certain extent they have a point. Very few people from the general public will pay to go or attend the various fringe talks surrounding the conference centre or to go into the main conference halls to hear the speeches and votes. However, party conferences do play a key role in our political discourse for the parties and can provide a key insight into the direction a party is going for those on the outside, not only in terms of policy, but in confidence and ambition. And this conference season was no exception.

For the likes of me, it provides a key opportunity to network and try and get face-to-face time with some important people you might not normally have access to and learn about the issues and policy agendas they care about. Days and evenings are meticulously planned to try and maximise time near relevant politicians and their staff, in the hopes of asking a key question or meeting a key person to push forward the BDA’s priorities. I’m pretty sure Wes Streeting, the Shadow Secretary of State for Health, was close to filing a restraining order, as I followed him from fringe meeting to fringe meeting around the Liverpool Docks.

Conferences also provide an opportunity to speak to key people in the health and social care policy space, exchanging details and putting faces to names. With lockdowns we’ve tended to forget the importance of an in-person meeting, particularly when dealing with politicians. But when you’re competing with a thousand and one emails going into an inbox, having that in-person connection can make a world of difference.

When you are at a party conference you can start to really understand what the politicians care about and what their focuses are. We, at the BDA were incredibly pleased to hear, for example, that Labour is committed to more spending in the NHS. They want to focus on preventative care in the community and reform of health and social care from a 20th-century system to a 21st-century system, to meet the modern challenges facing the United Kingdom. You could feel the mood in the hall during Wes’ speech with people happy to hear a strong plan for our NHS and wider health and social care. While he’s clearly preaching to the converted it helps to get a feel for how these policies might play out with the wider public.

We were disappointed, however, that the importance of Dietitians and other AHPs was not raised in Wes’ speech and largely absent from the discussion at the Labour fringe events, apart from where we raised them. We all know that diet plays an integral role at every stage of a person’s care from prevention, to treatment, to recovery. It is therefore vital that any plan for reform of our health and social care system understands that role and recognises that it is not just doctors and nurses that are facing a crisis, but almost every health care profession including dietetics. While this was disappointing it shows us what areas we need to focus on with Labour and what’s important to the politicians and where our aims overlap.

It’s not just the politicians that you’re looking to listen to at a party conference though, it's the members and the feel of the conference in general. This can give you a strong indication of the health of a party and how it feels about itself going into the next General Election. The last Labour Conference I attended in person was Brighton in 2019, the weather was stormy, with the general mood not much better. Boris Johnson’s bounce for the Conservatives in the polls, prorogation of Parliament and Brexit hung over the conference, causing other policies to struggle to cut through.

While the weather on the Liverpool Docks was at times not much better than Brighton, the mood was in stark contrast to 2019. You could feel in fringe meetings, networking events, and main hall speeches by politicians that Labour feels confident in its chances at the next election. Labour speeches and policies seemed to cut through the media discourse and as the week went on you could tell in every hall, room, corridor, and hotel bar that Labour feels it can win the next general election and can govern.

Contrast this to the Conservative Party Conference, where we saw the Conservatives struggling to get its policies to cut through the drop in the pound, semi-U-turn on tax (which has since become a full U-turn), the ever-looming energy crisis, and discord within the Cabinet. While it can be possible to read too much into the mood of a conference, and predicting political movements can sometimes be likened to trying to read tea leaves, they are nonetheless a bellwether of who’s going forwards with confidence and unity and who is… less so.

So, what can we learn from this year’s Labour and Conservative Party Conferences and what do they mean for the NHS, Dietitians and Dietetic Support Workers, and health and social care in general? (Written at the time of the 2022 Conferences.)

We can see that the health and social care workforce is high up on the Labour Party’s agenda, featuring in both the Leader and Shadow Chancellor’s speeches. Keir Starmer stated that a Labour Government would be committed to workforce expansion. A Labour Government would provide an extra 7,500 medical student places each year, double district nurses, and offer 10,000 more extra nursing placements. The Shadow Chancellor Rachel Reeves also announced that Labour would use the reintroduced top-rate of tax to fund this workforce expansion.

The workforce appeared to be lower on the agenda at the Conservative Party Conference, however, not featuring in either the Prime Minister or the Secretary of State for Health Thérèse Coffey’s speeches. Thérèse largely pointed towards the Government’s ‘Our Plan for Patients’ document published earlier in September. However, as we noted at its launch, this lacks detail in regard to a specific workforce strategy.

This shows us that Labour appears to be more alive to the workforce issues facing the NHS and wider health and social care. However, neither party has placed a specific focus on AHPs and the struggles they are facing around workforce presently, and as such the BDA and other AHPs need to focus on pushing AHPs up the parties’ agendas.

During Labour’s Leader’s speech, Keir Starmer pledged more investment within the NHS, with Rachel Reeves providing specifics about spending the top rate of tax on expanding the NHS workforce. Beyond this, there were no major specific pledges by Labour around investment in the NHS.

Thérèse Coffey provided more specific numbers in relation to spending in the NHS. She stated that Government funding on health and social care this year was £173 billion compared to £124 Billion in 2010, an increase of £51 billion. £500 million has also been pledged to support local councils and local NHS Trusts with discharges over the winter. However, other than the £500 million no new major NHS spending commitments were announced by the Conservatives at their conference.

Keir Starmer stated Labour’s plan for health would be to move to a community focus, exploiting technological possibilities, and ensuring that prevention and early intervention are a core part of health care. This was echoed by Wes Streeting, outlining the need for the NHS to modernise or it will become unsustainable, and that a data revolution is at the heart of Labour’s ten-year plan for the NHS.

As I mentioned before, Thérèse Coffey pointed to the Government’s ‘Our Plan for Patients’ when discussing the NHS. She stated that too many patients don’t have a good experience in the NHS and the party would hold the NHS to account for delivery. The Government plans to roll out diagnostic centres to free up hospital capacity and will maximise the use of the independent sector. She also stated that preventative action is better and good for the economy, however, the Government has scrapped the health inequalities paper and you can read our response here. The Prime Minister also committed the Health Secretary to reducing ambulance waiting times, improving A&E, tackling the Covid backlog, and bolstering social care.

Both parties have highlighted the importance of early intervention and given the important role that Dietetics plays within this space, the BDA will continue to champion the role of Dietitians, Dietetic Support Workers and other AHPs.

The next general election is still potentially far away, but as the last few weeks have shown, politics can move quickly! It is clear that Labour wants to focus on health and social care as it was a prominent piece across Keir Starmer, Rachel Reeves, and Wes Streeting’s speeches. The Conservatives via the Prime Minister and Thérèse Coffey’s speeches are focusing on waiting times and patient experience.

As such the BDA and our members can take this as an opportunity, with health high on the agenda, to push forward our ideas and aims for our health service, social care, and our society.

If you want to be involved in shaping our approach to Government and politics, please consider joining one of our Specialist Groups and volunteering on their committee or become a BDA Union Representative today.

Alternatively please get in touch with the Public Affairs team.

What's it like to volunteer for a specialist group?