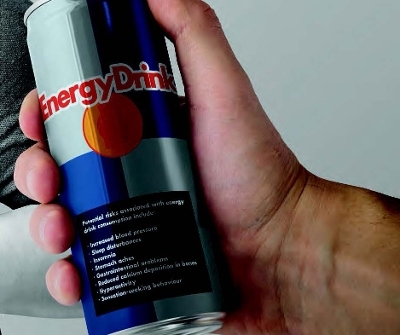 Consumption of energy drinks by young people is on the rise. Specialist Paediatric Eating Disorder Dietitian, Annabel Gipp, looks at the possible reasons for this and the associated effects on adolescent health.

Energy drinks appear frequently in headlines and news stories, mostly in a negative light. A Google search reveals some of these headlines such as ‘The life threatening impacts of energy drinks’ and ‘Teen dies after ONE can of energy drink’. However, these drinks are becoming increasingly popular with young people. So are these products really that dangerous? And if they are, why are they so widely available to young people?

What are energy drinks?

An energy drink derives its energy from glucose but can also include added ingredients to help ‘boost energy’ including caffeine, taurine and ginseng and typically contain a minimum of 150mg/L of caffeine (1,2 see references under this article). ‘Zero’ or ‘Diet’ versions of energy drinks are also available, using sweeteners to reduce the calorie content, but maintaining high levels of caffeine and other stimulants. In 2014, Red Bull was the most popular energy drink occupying 25% of the market value, followed by own-brand products at 12%, Monster at 10% and Relentless at 5% (3).

Energy drinks are marketed to improve concentration and to reduce tiredness, through providing energy, caffeine, and other ingredients which aid with fatigue or with energy metabolism, including vitamins and flavourings.

Whilst the overall consumption of soft drinks has fallen in recent years, energy drinks have increased consistently since 2006, with a 155% increase in sales. This equates to 600 million litres sold in 2014 and those aged 10-14 years are expected to increase consumption by 11% from 2014-2019 (2). In the UK, increased energy drink consumption can be linked with being male, an older adolescent, having special educational needs and being eligible for free school meals (4).

The mounting body of evidence demonstrates that the consumption of energy drinks is detrimental to both the physical and mental wellbeing of young people, as well as encouraging other risky behaviours such as alcohol use

Physical effects from over-consumption of energy drinks are mostly related to caffeine. Increased caffeine consumption in children and adolescents results in increased blood pressure, sleep disturbances, headaches and stomach aches. Selfreported injury due to hyperactivity has also been reported.

Adolescence is also the time of maximum bone deposition and caffeine interferes with the absorption of calcium in the small intestine and so may lead to reduced calcium deposition in bones. This may also be as a result of energy drinks being consumed instead of calcium-containing drinks such as milk (6).

There have also been reported differences seen to ECG traces for adults after energy drink consumption. Whilst caffeine has been found to have no ill effects on cardiac output, one study from the American Heart Association found that consumption of energy drinks showed a significant prolongation of the QTc interval in adults. This elongation of the QTc interval can be a sign of increased risk for fatal arrhythmias, and for individuals who may have underlying cardiac problems, this may be dangerous (7).

In addition to physical effects, mental health effects due to consumption of energy drinks can include sensation-seeking behaviour, self-destructive behaviour, insomnia, problems with behavioural regulation and poor lifestyle behaviours, such as poor diet and consumption of fast food. The use of energy drinks in adolescents may also be affecting future food and drinks
choices in young people due to alterations in the developing reward and addiction centre of the brain and the addiction due to the high caffeine content (6,8).

Energy drinks are also potentially playing a role in the obesity crisis and as a tool to help keep weight low in young people with eating disorders. Sugar-sweetened beverage consumption is linked with diabetes, dental decay and increased BMI in young people (11). In addition, a link between energy drink use and sedentary behaviour has been noted (12). Conversely, for the eating disorder population, low sugar versions of energy drinks may form a way of boosting energy through caffeine and stimulants plus promote loose stools and supress appetite. Young people with eating disorders are at a higher risk of cardiac arrhythmias due to their low weight, so the use of these products may be particularly worrying (6).

Whilst the detrimental effects of energy drinks are clearly wide-reaching, there has been relatively low numbers of toxicity reported in emergency departments. Data collected from the Australian NSW Poison Information Centre logged 297 calls over a seven year period relating to energy drink consumption in young people, increasing from 12 in 2004 to 65 in 2010. Symptoms ranged from gastrointestinal upset and hyperactivity to hallucinations, seizures and cardiac ischaemia. 128 people required hospitalisation in this study (13). There appears to be little information collected on this topic by the UK-based poison centres, although this data is routinely collected in Australia and the USA, hence the need to extrapolate Australian data.

Why do young people consume these drinks?

The reason that young people choose energy drinks is hard to pinpoint. Advertising and brand loyalty play a large part in the desire to consume these products and young people report that they see these products being advertised on television, on the internet, through sports sponsorships, video games and in shops, despite pledges from advertisers to reduce this (5). Taste and the need for an ‘energy boost’ may also be a reason to consume energy drinks. Parental consumption seems to also be a driver for adolescent use.

There is no current limitation on the sale of these products to young people. The British Soft Drinks Association says that high-caffeine products are not recommended for young people, although this is not currently backed by law like tobacco or alcohol in the UK. Countries such as Sweden and Lithuania have bans in place for the sale of high-caffeine drinks to under 18s. Other countries introduced a tax on these high-caffeine products which reported to reduce consumption, and generated income for ‘Get Healthy’ programmmes (1).

With the government expecting to introduce a levy on products with more the 5g and 8g of sugar per 100ml in 2018, it is predicted that the consumption of sugar sweetened beverages will fall (14). However, it is not clear what effect this might have on energy drink consumption, although, it is reported that young people do already find energy drinks expensive (5).

What should nutrition professionals be advising?

This leaves the question of – what is our responsibility as health professionals? The British Medical Journal states that health professionals should be advising and educating patients, the public and industry on the potential harmful effects of energy drinks, especially when being mixed with alcohol (8). Seifert et al go further to say that the use of energy drinks should be included in standard health screening for young people, especially in at-risk populations such as those with high-risk behaviours and certain health conditions e.g. heart problems, anorexia nervosa or anxiety (6).

As nutritional professionals, it may fall to dietitians and our skills in nutritional education and communication to educate that energy drink consumption, at present, appears to have more negative than positive outcomes (15). Due to the heterogeneity of the products that are currently available on the market, it is very difficult to advise which products may be safer than others, indicating that energy drinks should potentially be avoided altogether in preference for other options such as fruit juice, water or milk for young people (8).

The mounting body of evidence demonstrates that the consumption of energy drinks is detrimental to both the physical and mental wellbeing of young people, as well as encouraging other risky behaviours such as alcohol use.

There is currently little legislation restricting the sale of these products to young people, and understanding about their effects is minimal. As healthcare professionals, it is our duty to ensure that evidence-based information and education is available to allow parents and young people to make educated choices regarding energy drinks.

In relation to this article you may find the following BDA policy statement useful, Interventions which reduce the consumption of energy from sugary drinks in children (January 2015).

4. Richards, G. & Smith, A.P. Breakfast and energy drink consumption: breakfast omission in isolation or in combination with frequent energy drink use, is associated with stress, anxiety and depression cross-sectionally, but not at 6-month follow up. (2016 Front Psychol; 7:106

This article was first published in February 2018.

BDA Response to the Health and Social Care Committee Report on Workforce: recruitment, training and retention in health and social care