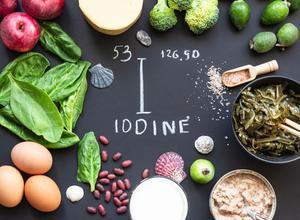 This Food Fact Sheet explains why iodine is needed, its food sources and how much is needed.

Iodine is a mineral that is important for health. It is a key part of the thyroid hormones that are needed for many body processes including growth, metabolism and for the development of a baby’s brain during pregnancy and early life.

Do we get enough iodine in the UK?

Research has shown that, on average, children have sufficient intake. However, there is evidence that teenage girls and young women do not get enough iodine. A number of studies have also shown iodine deficiency in those who are pregnant.

How much iodine do I need?

What happens if I do not have enough iodine?

A low intake over a long period of time will cause your thyroid to work harder to try to keep the right amount of thyroid hormones in your blood. Your thyroid may then increase in size in order to trap iodine – this swelling, or “goitre”, may be visible in your neck. However, visible goitre due to low iodine intake is rare in the UK.

If you have an iodine deficiency during pregnancy, there may be effects on the baby’s brain development, which could lead to problems such as lower IQ or reading ability in later life.

Before and during pregnancy and breastfeeding

As iodine is required from the very early stages of pregnancy, you should make sure you have been having enough in your diet for several months before getting pregnant. It is possible to build up good stores of it in your thyroid which can help it to function well during pregnancy, particularly in the early stages. So, if you are of childbearing age, and especially if you are planning to get pregnant, you should make sure that you are meeting the adult recommendation for iodine intake.

During pregnancy, the amount you need increases in order to make enough thyroid hormones to transfer to your baby to help its brain develop correctly. Iodine deficiency in pregnancy may have serious consequences for your child so it is very important that you meet that higher requirement if you are pregnant.

You will also need a higher amount whilst breastfeeding, so that your human milk contains enough iodine for your baby whose brain is still developing.

Where is iodine found in the diet?

It is found in a range of foods, the richest sources being fish, milk, and dairy products. In general, white fish contains more than oily fish. Milk and dairy products are the main sources for most people. It is important to be aware that most milk-alternative drinks (e.g. soya/almond/oat) are not fortified with iodine and have a low iodine content. Some milk-alternative drinks are fortified so it is important to check the product label.

Seaweed is a very concentrated source of iodine, but it can provide excessive amounts (particularly so in the case of brown seaweed such as kelp) and therefore eating seaweed more than once a week is not recommended, especially during pregnancy.

In many countries, iodine is added to table salt to give “iodised salt”. Iodised salt is not widely available in the UK but can be found in some branches of several supermarket chains. As Government recommendations are to reduce salt intake for health reasons, iodised table salt should not be relied on as a means of increasing intake. It is very difficult to estimate the amount of iodine in food. This is because the actual amount varies for a number of reasons, including the iodine content of the soil, farming practice, season, and type of fish. The figures in the table are therefore for guidance only. Remember to follow Government advice on foods to avoid during pregnancy.

**Depending on the season, higher value in winter

Can I have too much iodine?

Yes – excessive intake can cause thyroid problems and should be avoided. Kelp and seaweed are food sources that are likely to lead to excessive iodine intake. It is difficult to say how much is too much, as this varies between people. People with thyroid disease and those who are already iodine deficient may be affected by iodine intake that would be considered normal for the general population. However, as a rough guide, intake in adults should not exceed 600 mcg/day.

Who is at risk of iodine deficiency?

Anyone who avoids fish and/or dairy products (e.g. due to allergy or intolerance) could be at risk of iodine deficiency. Vegetarians and particularly vegans are at risk as they do not eat most iodine rich foods, and therefore may need to consider a suitable iodine-containing supplement.

Should I take an iodine supplement?

There are currently no official UK recommendations for adults or those who are pregnant to take an iodine supplement. It is better to meet recommendations through diet where possible. Most adults following a healthy, balanced diet that contains milk, dairy products and fish, should be able to meet their iodine requirements.

If there is adequate intake before and during pregnancy, an iodine supplement may not be needed. Many, but not all, pregnancy multivitamin and mineral supplements contain iodine. If the supplement does contain it, check that it does not provide more than 150 mcg – the remainder of the requirement for pregnancy can be met by the diet. For those who do not consume sufficient iodine-rich foods, a supplement containing iodine may be useful. The following information may be helpful when choosing a supplement:

Iodine is needed for the production of thyroid hormones. It is important to avoid having too little or too much. Good dietary sources include fish, shellfish and dairy products. During pregnancy, iodine is essential for the correct development of the baby’s brain.

We understand not all parents will be comfortable with the word breastfeeding, and other words such as chest-feeding and body-feeding may be preferred. We have used breastfeeding here to make this sheet as understandable as possible to the widest audience.

We encourage dietitians and other healthcare workers to use the language that best suits each parent they support.

Iodine: The debate around fortification

The essential role of iodine in the diet

Andersson M, de Benoist B, Delange F & Zupan J (2007) Prevention and control of iodine deficiency in pregnant and lactating women and in children less than 2-years-old: conclusions and recommendations of the Technical Consultation. Public Health Nutr 10, 1606-1611.

This Food Fact Sheet and others are available to download free of charge at www.bda.uk.com/foodfacts

This resource has been produced by the BDA in partnership with Dietitian Dr Sarah Bath and Professor Margaret Rayman.