Health unions, alongside the British Dietetic Association Trade Union, won’t be submitting joint evidence to the NHS pay review body (PRB) for the next wage round while the current industrial disputes remain unresolved.

Instead, the 14 unions – representing more than one million dietitians, ambulance staff, nurses, porters, healthcare assistants, physiotherapists and other NHS workers in England – have called for direct pay talks with ministers.

Unions believe the lengthy pay review body process is not able to deliver what is needed right now. That’s a deal that resolves the current pay and staffing dispute and puts in place a settlement needed to get the NHS back on track.

In the current economic climate, it would be far better if NHS pay negotiations could be convened involving unions, employers and ministers, say the unions.

This should ensure a speedier outcome, and one that could deliver the kind of settlement necessary to turn the NHS staffing crisis around.

The deadline for submitting evidence for the 2022/23 pay year was the end of last January. But it was almost six months later when ministers made public their acceptance of the review body’s £1,400 flat-rate rise. By then inflation had gone through the roof, say unions.

The BDA, alongside the other unions have now decided against a formal collective submission to the pay review body this year, preferring the more direct approach of talks with ministers.

Evidence for the 2023/24 pay round is meant to be submitted on 11 January. Instead, the NHS unions have collated the case for investment in NHS pay into a publicly available document. This outlines the necessity of investment in pay and staffing to the health service, its staff, patients and the wider economy.

Annette Mansell-Green, director of the BDA Trade Union, said: "What we need is a better pay award for our members working in the NHS and we need this issue to be resolved quickly.

"The reality is that the PRB process has failed to deliver adequate, inflation proof pay awards for NHS staff over the last 12 years, leading to real terms pay cuts for staff. This is something that can no longer be tolerated so change is overdue. Whether this is reform or otherwise remains to be determined. At the moment, however, confidence in the process is at an all-time low which can be attributed to the lack of willingness of this government to recognise the pay crisis in the NHS and other areas of the public sector.

"We are open to talks and finding an acceptable solution for all, and we are more than willing to negotiate on NHS pay for the next financial year.

"Hopefully this collective action, alongside the development of the document identifying the need for investment in NHS staff, will make ministers listen. This issue isn’t going away.”

The document setting out the case for investment in NHS pay is available here.

“The NHS staffing crisis is so acute only prompt action on pay – both for this and the next financial year – can start to turn things around.

“The public knows ambulance response times are worsening and hospital waiting lists growing because the NHS no longer has the necessary staff to meet demand, nor provide safe patient care.

“Ministers must seize the initiative, get everyone around the table and negotiate a way to the best deal for staff, patients and services.”

Whilst this issue remains unresolved in England and Wales we still plan to ballot members on industrial action in the coming weeks. 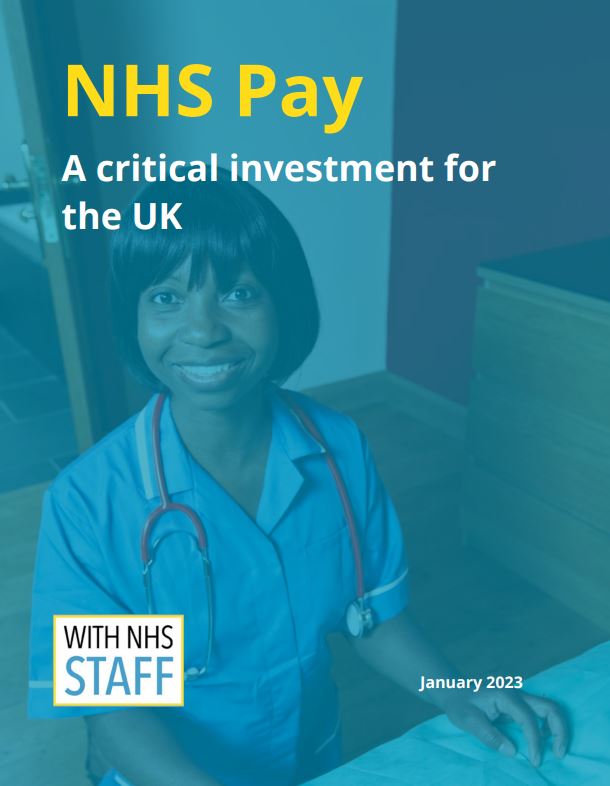 Read the the case for investment in NHS pay here.