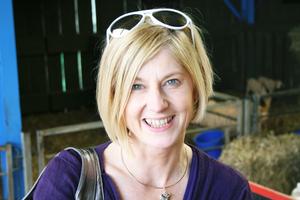 BDA member and Dietitian Linda Hindle, Deputy Chief AHP Officer for England, has been awarded an OBE for services to public health in the Queen's Birthday Honours.

Linda, who also works as Lead Allied Health Professional and National Engagement Lead for Public Health in Police, Fire and Ambulance Services at the Office for Health Improvement and Disparities (OHID), shares what it means to receive the honour.

How did you feel when you were told you were being awarded an OBE?

"It was a shock! You just get a letter to say the Prime Minister wants to recommend you to the Queen for this honour and check you’re in agreement. I was dashing between meetings to take my daughter somewhere and saw this letter on the way out of the house and thought it looked important. I scanned it in the car and couldn't take the grin off my face!

"You're not supposed to tell people but I had to tell my daughter because she wondered why I had this big smile on my face. She knew, along with my husband, but it was hard to keep it a secret. I had to keep it secret for about six weeks, quite a long time. The biggest thing was to keep it from my mum, I knew she would be over the moon. I went to do her decorating for her and had this big thing I couldn't tell her, but she would have struggled not to let it out - half of Barnsley would've known!"

"It doesn't feel real in a sense. It feels like it's happening to somebody else. What’s been really nice is loads of really nice messages from people who I work with now and years ago who I haven't seen for ages. It's important for AHPs to be recognised and within OHID it’s useful to raise the profile of the work we do as AHPs. I had messages from our directors within the organisation which is good recognition."

Tell us about the work you did that led to the honour.

"I believe the nomination was partly because of the work I've done over the years in relation to raising profiles of AHPs in public health but probably more specifically during the pandemic. It was about coordinating the AHP response to the pandemic.

"On behalf of Suzanne Rastrick (Chief Allied Health Professions Officer) I took the role of overseeing our plan at a national level for the pandemic. The things we had to do during that time - and it wasn't just me doing them - were expanding leadership, preparing for the surge of capacity in Nightingale hospitals, responding to queries from professional bodies about guidance, making sure we were able to bring back staff, and expanding the register with the HCPC for those who had left recently. Also, enabling final year students to be able to work during the pandemic.

"Lots of other things probably never got into the public domain, for example, what happens if someone dies in service? Lots of pieces of work like that to make sure we had a coordinated approach."

How long have you been working in Dietetics?

"I qualified in 1989 and have been a BDA member since then - in fact, I was probably even a student member before then. I worked most of my career in Birmingham, I worked at City Hospital. I spent most of my career in community dietetics. I used to manage Birmingham Community Nutrition and Dietetic Services before becoming a Consultant Dietitian in obesity. I worked in obesity treatment and primarily the prevention of obesity in adults and children.

"When services went into local health authorities I went into Birmingham City Council to lead the obesity and physical activity programme there. It was a really good opportunity to see how local government works compared to the NHS. That work involved working in partnership or collaboration with other organisations - be that third sector, other teams like town planning, schools, fast food takeaways, or retail organisations. That is probably what put me in the right position to get the role I'm in now.

"Originally I joined Public Health England as a lead there, before more recently into OHID. My role here is about increasing the profile of and contribution of AHPs to public health prevention and reducing health inequalities. I've been in this role since the end of 2013. During that time AHPs - including Dietitians - have been recognised as an integral part of the public health workforce, and our role and contributions have increased significantly. My role in Police, Fire and Ambulance is a similar role, supporting those sectors to be more engaged in the public health agenda. Both roles are all about systems working and collaboration, so it's the same sort of approach.

"I've worked closely with the BDA throughout my career. I used to be on the Centre for Education and Development Committee. I was Chair of the BDA Obesity Specialist Group for quite a long time and have been on the England Board as well. It's been quite important to be involved and has helped me and hopefully helped the BDA as well. I also did the Elsie Widdowson Memorial Lecture in 2015."

It’s all in the preparation