Health unions representing 1.2 million NHS staff in England have responded to the 3% NHS pay rise announced by the government, which accepts the recommendation made by the independent pay review body.

BDA Director of Trade Union and Public Affairs, Annette Mansell-Green, said: “This is an insulting offer to our members who have not only gone above and beyond during this pandemic but also faced over a decade of real-terms pay cuts. We are angry not only with the offer, but also the delays to make it.

“Many will feel ministers’ shambolic behaviour shows an unwillingness to truly reward the NHS staff they have been clapping over the last 18 months.

“On top of the steady decline in the value of NHS wages, 3% works out as only £2 per week after deductions for many of our members and is below the predicted 3.7% inflation they will face in their bills. This is simply not enough.

“We will be consulting with our members in England on this offer in due course.”

UNISON Head of Health and Chair of the Joint Health Unions, Sara Gorton said: “Dedicated staff have been waiting far too long for a decent pay rise. That the government has moved from the insult of 1% shows ministers realise the damage that’s been done.

“But the memory of 1%, combined with lengthy delay, has done lasting damage to morale and the trust staff have in ministers. The government will have to do much more to win that back.

“Even though the Prime Minister has moved in the right direction, the increase will fall short of expectations.

“Pay is so important not just for staff but for the NHS too. After the nightmare of the past year, health workers need to know the government has their back and understands what they’ve been through.

“As staff ready themselves to deal with another wave, the government must speak up and show it values what they’ve done. Not just during the pandemic but in tackling the mammoth backlog too.

“Unions will now consult their members to determine their approach to the 3% pay award.”

“The government has spurned a golden opportunity to address several years of low pay and plummeting staff morale. This decision will have a devastating effect upon services provided to patients.”

Royal College of Midwives Executive Director for External Affairs, Jon Skewes said: “We are disappointed that this pay award is not on par with what NHS staff received in Scotland, but at least the limbo hard working staff in England were left in by our government has ended.

“The pay rise reflects the recommendation of the PRB, but it’s not enough not to solve long-standing recruitment and retention issues within the NHS. Sadly, many staff are already eyeing up the door and 3% will not be enough for them to stay.” 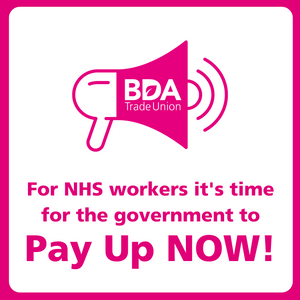