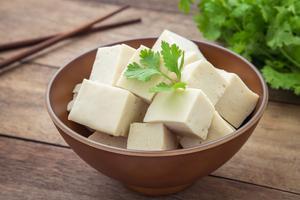 Many different foods are made from soya beans, a type of legume. These foods are popular choices in many Chinese and Japanese diets. They are consumed as soya beans such as edamame, products such as drinks or as tofu. Soya-based products can also be fermented to produce tempeh and miso.

Soya foods (or US spelling, soy) are now popular in the UK. They are consumed in different forms, mainly as a plant-based alternative to dairy milk. Soya products are also available as plain or flavoured dessert items, as plain or marinated tofu, or as burgers or mince.

Soya fits in with UK government dietary recommendations for healthy and environmentally sustainable diets. The Eatwell Guide advises consuming ‘more beans and pulses’ balanced with less meat and dairy. Soya drinks and yoghurt alternatives are also included in the dairy and alternatives section.

You may choose soya because of problems consuming dairy, for example cows’ milk allergy or lactose intolerance. Some people believe soya foods to be healthier, particularly in relation to heart disease risk, or reduction in menopausal symptoms.

About five per cent of the UK population are now vegan or vegetarian. Many people consume less meat and dairy, choosing plant protein foods for environmental reasons. Some simply prefer the taste and variety of soya-based foods now available.

Soya products provide a very good source of many nutrients. These include protein, unsaturated fats, fibre and various vitamins and minerals.

Most soya drinks (‘milk’) are fortified to ensure that they match or exceed micronutrients usually found in dairy milk. These are usually calcium, iodine, vitamins B2, B12 and D. Organic products are not fortified.

Soya contains other components that may have effects on health. There is particular interest in isoflavones. Isoflavones are a type of phytoestrogen. These are plant components with a similar structure to the hormone oestrogen.

Although the oestrogenic activity of isoflavones found in soya foods are different and much weaker than oestrogen produced in the body, there has been a lot of research investigating whether dietary intakes may have health benefits.

Many large studies demonstrated that consuming soya resulted in lower cholesterol levels in people with high cholesterol. Food labelling authorities in the UK, USA and Japan have approved statements that including '25g of soya protein per day can help reduce blood cholesterol levels'.

However, an assessment by the European Food Safety Authority in 2010, rejected proposals linking soya proteins and cholesterol-lowering effects.

A common symptom of menopause is hot flushes, associated with a decline in oestrogen levels.

Research published in 2012 reported that consuming soya isoflavones resulted in at least a 20% reduction in frequency and severity of flushes. You may find these beneficial, but less potent than the use of Hormone Replacement Therapy (HRT), which may be advised in more severe cases. Find out more in the BDA Menopause Food Fact Sheet.

Low risks of prostate cancer have been observed in Chinese men, suggesting typically higher soya consumption has a possible protective association. Some studies have suggested a slower rise in prostate cancer risk markers in patients with higher intakes of isoflavones.

Studies consistently show that eating soya foods does not affect levels of any hormones in men. Adverse effects on fertility or sexual health have not been reported either. There have been concerns about possible effects of soya-based formula in infants, as isoflavone intakes would be proportionally much greater compared with adults.

The BDA advises that soya-based formula should only be used in exceptional circumstances in particular young infants, to ensure adequate nutrition.

If you take thyroid medication, ask your doctor or dietitian for advice on consuming soya products. There are no harmful effects on normal thyroid function, but soya may interfere with absorption of thyroid medication.

The government’s dietary recommendations, the Eatwell Guide (2016), recommends a significant shift toward more plant-based eating both for the nation’s health as well as a more sustainable planet. Over 75% of the Eatwell Guide is made up of plant foods. The most notable change is to the protein section, which recommends plant-based proteins over animal proteins.

A significant percentage of the global soya crop is grown in the Amazon rainforest, contributing to its destruction. The majority of this soya is used to feed industrialised livestock. However, soya grown for food and drink for human consumption in the UK and Europe is grown in many different countries. Check with individual manufacturers.

The Use of Blended Diet with Enteral Feeding Tubes

MyNutriWeb: Soya is safe and healthy