SENR Practitioners will provide expert nutritional support to fuel the performances of athletes at this summer’s XXII Commonwealth Games. Ahead of the Commonwealth Games, SENR Executive Support Consultant Dr Alan Kennedy, spoke with Sport Northern Ireland Performance Nutritionist Dr Julia Bone, learning about her extraordinary career journey to date and her approach to the nutritional management of her competing athletes.

For Dr Julia Bone, the world is indeed a small place. Born in Peru, Western South America, she and her family immigrated to Auckland, New Zealand during her early childhood. Not long later, the family moved again to the South Island of New Zealand, ultimately settling in Invercargill, one of the southernmost cities on the planet. 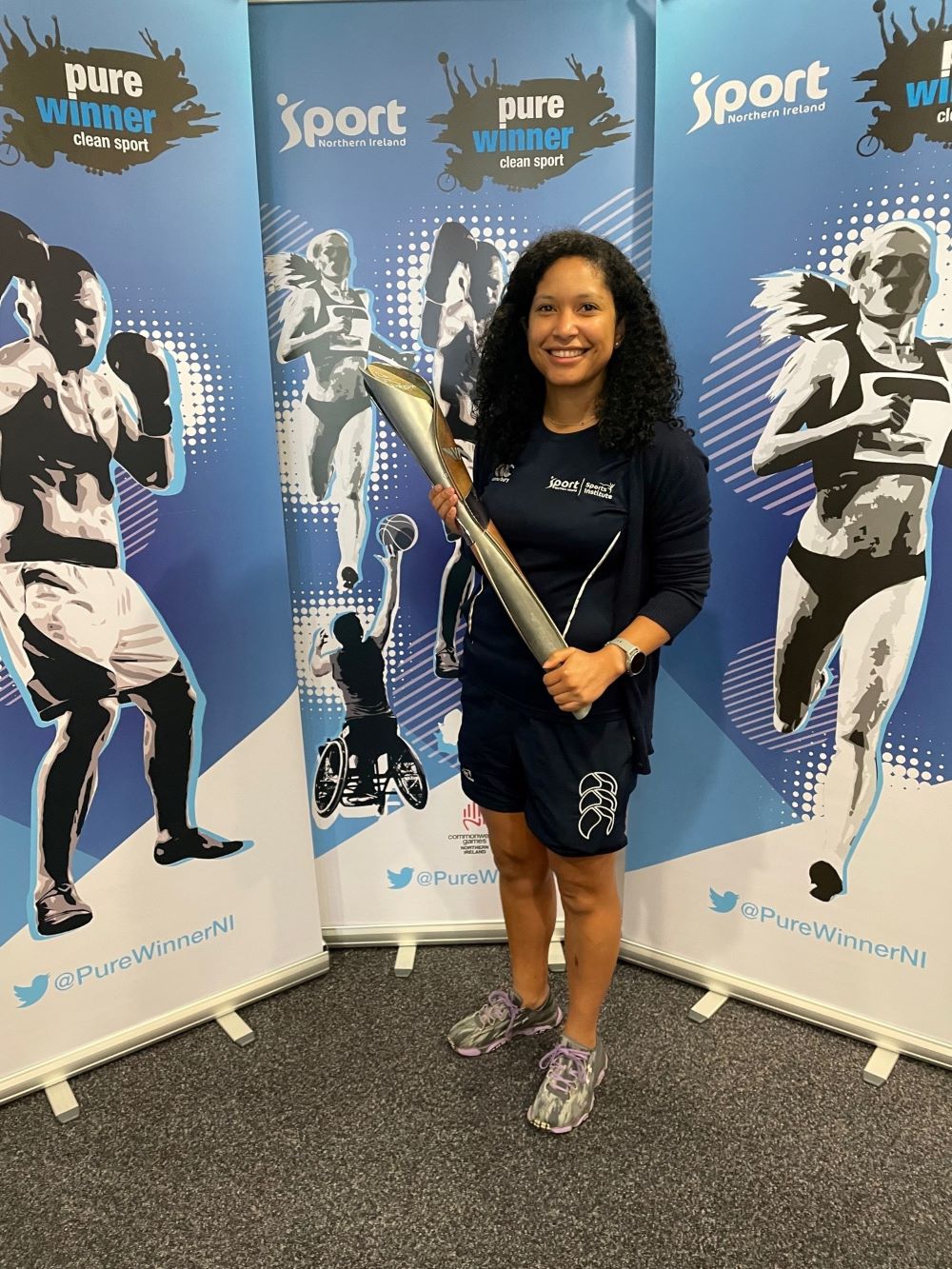 It was here she spent her teenage years and, via attendance at a state initiative known as the Genesis Science and Technology Forum, an interest in the health sciences was developed. Successful completion of a first year programme in Health Sciences at the University of Otago in nearby Dunedin progressed Julia to a Bachelor of Applied Science degree in Sports and Exercise Nutrition.

“It was the first year of the course, with only four out of five initial students progressing to graduation but, as a consequence, we were very close to our lecturers, who also acted as career advisers,” reflects Julia. “I knew I wanted to work in high performance sport, so their advice pointed me toward further post-graduate research experience and dietetic qualification, which would help open opportunities to work with athletes in both New Zealand and Australia.”

An MSc in Human Nutrition at Otago followed, from which Julia graduated with distinction and her next geographical relocation was to prove pivotal toward attainment of her desired career.

With entrance criteria to post-graduate dietetics in Australia more favourable than New Zealand at the time, Julia made the decision to start a Master of Dietetic Studies at the University of Queensland (UQ), located in Brisbane. However, following graduation and registration as a dietitian in 2012, Julia describes the subsequent nine months as possibly the most challenging of her career to date. “I’d done well academically and been rewarded for hard work, but the combination of too many graduates and a shift in funding at Queensland Health away from nutrition made for a lack of dietetic jobs,” she says. “To make ends meet, I worked in a call centre, providing customer support.”

During her dietetic studies however, she had joined Sports Dietitians Australia (SDA) as a Student Member and was continuing to gain valuable sports nutrition work experience through voluntary roles with the Brisbane Broncos Rugby League squad and Golf Queensland. Whilst a paid dietetics post did eventually materialise within a private practice in 2013, an advertisement for an Australian Institute of Sport (AIS)/Australian Catholic University (ACU) PhD Scholarship re-kindled the dream and signalled Julia’s next relocation.

With the help of support from her former lecturers at Otago, she successfully applied and interviewed for the post in Canberra. The project supervisor was Professor Louise Burke, whose enormous body of work in sports nutrition research Julia was acutely aware of. “It was all very surreal, and I definitely felt imposter syndrome starting there, but everyone was incredibly supportive and I joined a community of like-minded individuals who had made the move to the AIS.” Her PhD was focussed on the assessment of metabolic rate and body composition across a range of sporting disciplines and she quickly began to accrue further applied experience, working with athletes at the Basketball Australia Centre of Excellence and Tennis Australia ACT Academy which were based at the Institute.

In her final year of PhD study, Julia attended the annual European College of Sport Science (ECSS) Congress in Vienna, Austria, and a meeting there with Professor Graeme Close (Professor of Human Physiology at Liverpool John Moores University and current Vice-Chair of the SENR Board) raised awareness of the SENR and its growing significance for employment within high performance sports nutrition roles in the UK and Ireland. Consistent with her lifelong willingness to travel toward opportunity, Julia had been considering the possibility of practising within Europe following her thesis submission. “I was telling everyone at the ECSS that I was looking for a job,” she says, laughing. “I did apply for jobs in Australia, but there were more coming up in the UK, Ireland and Europe, and I was willing to go where the opportunities were.”

She then submitted an application to the SENR for recognition of her qualifications toward Practitioner Registration, which met with success, and interviewed for a vacancy with Sport Northern Ireland via Skype. “I was so certain I wouldn’t get it,” she says. “Why would they hire someone who was living in Australia?!”

They offered her the post and she committed to start in January 2018. Following 48 hours of travel, moving from the southern hemisphere mid-summer to northern hemisphere mid-winter, Julia landed in Belfast – “as far from Invercargill as you could possibly get!”

In the subsequent four years within her role as Performance Nutritionist at Sport NI, Julia has worked to develop the nutrition provision across the traditional athletic and para-athletic disciplines, field sports such as hockey, and in more niche disciplines such as archery and bowls. For this years’ Commonwealth Games, Julia will support athletes preparing to compete in heptathlon, wheelchair basketball, lawn bowls, and para-triathlon.

Such diversity provides opportunity but also challenges for the sports nutrition practitioner, says Julia. “My approach varies depending on the demands of the sport and the experience of the athlete. For example, if an athlete is preparing for an event which takes place on one day (e.g. para-tri), compared to multiple days (e.g. lawn bowls and wheelchair basketball), then the advice around recovery, for instance, will be different, as one sport is finished while the others have to perform and compete again the next day.

“Then, within those sports, you have some athletes who know what works for them in terms of fuelling and how to manage being at a big event. Other athletes are still figuring that out, so it’s about providing education and getting them to trial different foods/strategies before the event. The last thing you want is for them to try a new food or supplement on the day of competition!

“Then, there’s other considerations, such as how far away their accommodation is from their competition venue, is there food access at the venue for after the match/race or do they have to pack that with them? So, figuring out those small details and making a plan about them, is also part of my role.”

For each competing nation at a major Games, selected athletes will invariably comprise a mix of seasoned campaigners and debutants. Julia advises her inexperienced athletes thus: “One challenge for athletes attending their first Games is preparing them for the village dining hall. Often there is so much choice available that it can leave them overwhelmed and may distract them from their nutrition plans. A way to overcome this is to bring some food from home that they know they like. Athletes that have attended Games before would often use this strategy. It could be as simple as their favourite brand of tea, or cereal bars, or porridge, just something that’s familiar to them that they know they will like.”

Beyond these Games, Julia hopes to work with her athletes towards Olympic qualification and competition. “I have an ambition to work at an Olympic Games as a career goal – it seems like a really challenging environment and I’d like to know if I’m up to that challenge.” Given her proven ability to adapt, to seek, accept and meet challenges, who would bet against that ambition becoming reality?

Four Afro-Caribbean recipes to inspire you this Black History Month