Dietitian Heather Russell writes about why The Vegan Society has produced a vegan version of the nutrition guide published by UK public health authorities.

The Eatwell Guide was published a few months before I started working at The Vegan Society. I’d used its predecessors for nearly a decade during my training and NHS career. It was great to see a new tool geared towards encouraging more plant-based and sustainable diets.1 (see references to the left) So when I started specialising in vegan nutrition, I began thinking about the need for a vegan-friendly guide.

Why produce a vegan version of the Eatwell Guide?

The Eatwell Guide is widely used and recognised. Both the original and Vegetarian Society versions acknowledge the nutritional roles of legumes and fortified dairy alternatives, but, obviously, both display animal products.1,2 This is far from ideal if you’re working with people who believe in avoiding animal use as much as possible and practicable.

Additionally, I think that good education about vegan nutrition requires knowledge beyond the basic principles of the Eatwell Guide. Creating a Vegan Society version has given us the opportunity to draw attention to some of the extra considerations.

At the start of this project, I realised that I didn’t know much about how the Eatwell Guide had been developed. With the help of one of our volunteers, I got more familiar with the nutritional model3 and explored a range of alternative guides. I also kept the BDA’s One Blue Dot work in mind.4

Once I was happy that an amended version of the Eatwell Guide could be used to communicate some of the key elements of well-planned vegan diets, I worked on replacing animal products with alternative sources of nutrition.

I was keen for the Vegan Eatwell Guide to encourage people to make the most of what plant-based nutrition has to offer – principally health-promoting wholegrains, nuts, fruit and vegetables, including legumes. I was also mindful that the guide needed to include affordable and widely available items.

In general, vegan diets have excellent sustainability credentials. For example, growing food for human consumption is considered to be an efficient use of land, crops and water5 and vegan diets have been associated with the lowest emissions of carbon dioxide.6 As with every eating pattern, there are things that you can do to go the extra mile for the planet. I decided to include some sustainability tips, which complement the healthy eating guidance.

Potential applications of this tool

It’s important to bear in mind that the Vegan Eatwell Guide isn’t a comprehensive guide to vegan nutrition. Detailed guidance is available at www.vegansociety.com/nutrition.

At a glance, the Vegan Eatwell Guide provides a rough idea of how to balance food groups and make good use of fortified foods and supplementation. I hope that dietitians and other nutrition professionals will enjoy using it to spark conversations during consultations and group sessions involving vegan clients. Here are some additional tips to help you cover the bases:

As with the original, the Vegan Eatwell Guide isn’t suitable in every situation. However, I hope that it’s a good starting point for a variety of discussions. 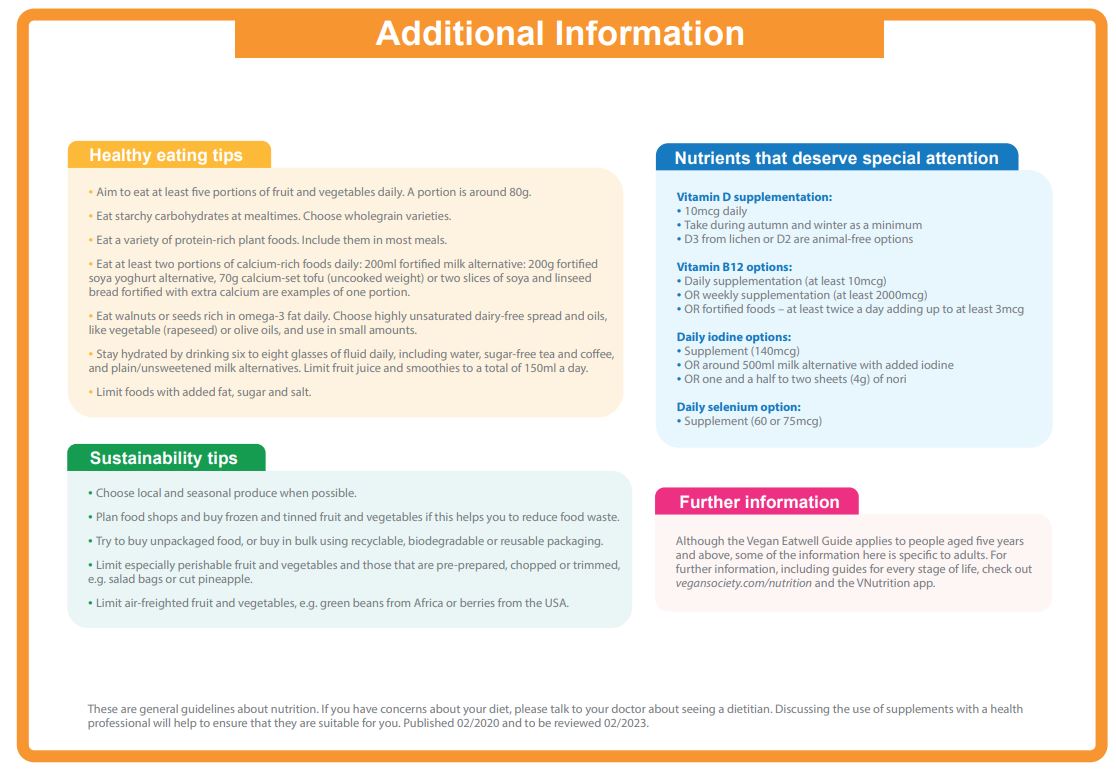 1 Public Health England (2016) The Eatwell Guide: How does it differ to the eatwell plate and why? Available from assets.publishing.service. gov.uk/government/uploads/ system/uploads/attachment_data/ file/528201/Eatwell_guide_whats_ changed_and_why.pdf (accessed 03-MAR-2020)

3 Public Health England (2016) From Plate to Guide: What, why and how for the eatwell model available from assets.publishing.service. gov.uk/government/uploads/ system/uploads/attachment_data/ file/579388/eatwell_model_guide_ report.pdf (accessed 03-MAR-2020)

Following a plant-based diet whilst having IBS