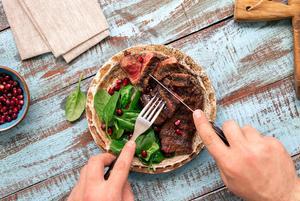 Iron is a mineral found in the environment. It is also found in lots of foods. Your body needs iron for muscle development during growth and to transport oxygen in healthy blood. Iron requirements vary, so careful choices are particularly important for some people.

What are the symptoms of iron deficiency?

Iron deficiency results in reduced haemoglobin in red blood cells. Haemoglobin is a protein that transports oxygen around the body. People with mild iron deficiency may look pale, and often feel tired and lacking in energy.

Iron plays a key role in maintaining a healthy immune system. If you have a deficiency, you could be more susceptible to infections. Severe iron deficiency is called iron deficiency anaemia. Symptoms include heart palpitations, brittle nails, thinning hair, itchy skin (pruritus) and mouth sores or ulcers.

Which foods are good sources of iron?

Some foods contain more iron than others.

Red meats (beef, lamb and pork) and offal are rich sources of iron, and the iron they contain is well absorbed. Other animal proteins such as fish and poultry also contain iron.

Plant-based sources of iron include:

The labelling reference for iron is 14mg, so a food declaring iron in the nutrition label, needs to contain at least 15% per 100g = 2.1mg. Many fortified foods will contain higher amounts.

The iron in animal-based sources is referred to as ‘haem iron’ whilst the iron in plant-based sources is often referred to as ‘non-haem iron’. Eating plant-based non-haem iron with animal protein foods and foods containing vitamin C can help your body absorb the iron. Foods containing phytates (bran-containing cereals) or tannins (tea and coffee) make it difficult for your body to absorb iron.

How much iron do I need?

You need iron the most during periods of fast growth, like infancy, early childhood and adolescence. If you menstruate (have a period) or are pregnant, you may also need more iron.

UK dietary surveys indicate that many women are not getting enough iron. If you are pregnant, your doctor will usually measure how much iron you have in your body and may recommend supplements if there is a risk of anaemia.

Your body controls how much iron you absorb from your food. Your body can take more iron from food when it needs it – like when you are growing or during pregnancy.

Some gastric conditions or gastrointestinal diseases can make it difficult for your body to absorb iron from food.

The genetic condition haemochromatosis leads to too much iron in the body. If you have haemochromatosis, you will need support from your doctor and non-diet therapies to treat it. With this condition, you can’t reduce the amount of iron in your body through diet.

How can vegans and vegetarians get enough iron?

Many plant-based foods such as beans, vegetables and grains contain some iron. You should eat foods containing vitamin C with meals, such as salad or juice, and avoid drinking tea during or after main meals.

In the UK some foods, including many breakfast cereals, are fortified. Read the label to identify the best choices for you. A dietitian will be able to give you advice on food choices if your iron requirements are particularly high, or if you are at risk of iron deficiency anaemia.

The Use of Blended Diet with Enteral Feeding Tubes

Public Health England (PHE), 2020, NDNS 2020, Results from the National Diet and Nutrition Survey rolling programme for 2016 to 2017 and 2018 to 2019 for food consumption, nutrient intakes and nutritional status. www.gov.uk

This resource has been produced by the BDA in partnership with Dietitian Ursula Arens.