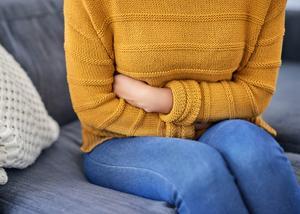 Irritable bowel syndrome (IBS) is a medical term used to describe a collection of gut symptoms. Food can have an impact on symptoms.

Symptoms vary from one individual to another and can be worse for some than others. It is a very common condition affecting around one in five adults. An assessment for IBS should be considered if you have had any of the following symptoms for at least six months: abdominal pain or discomfort, bloating, or change in bowel habit.

A diagnosis of IBS should be considered only if there is abdominal pain or discomfort that is either relieved by defaecation or associated with a change in bowel habit. This should be accompanied by at least two of the following four symptoms:

Other features such as lethargy, nausea, backache, and bladder symptoms are common in people with IBS and may be used to support the diagnosis. It is important to have a diagnosis of IBS confirmed and other conditions such as coeliac disease and inflammatory bowel disease ruled out. If you think you may be suffering with IBS, but also have any of the following symptoms, see your doctor to discuss whether a referral to a specialist may be required:

What steps can I take if I have IBS?

Dietary changes can often help IBS symptoms and sometimes simple changes are all that are needed.

If symptoms include bloating and wind

If symptoms include constipation

If symptoms include diarrhoea

You may wish to try yoghurt, a fermented milk drink such as kefir, or a ‘probiotic’ supplement.

If using a probiotic supplement, try one at a time and take it daily for at least four weeks to see if your symptoms improve. If it does not appear to help then you could try an alternative brand.

Give your bowels time to adjust to any changes. If your symptoms persist after following general lifestyle and dietary advice, re-introduce the foods you have cut out and ask your doctor to refer you to a healthcare professional with expertise in dietary management, who can ensure your diet is nutritionally adequate whilst following a dietary intervention e.g. a dietitian. They may suggest that you trial a diet restricted in fermentable carbohydrates (also known as a low FODMAP diet). You could ask your doctor, health visitor or other medical staff to refer you to an NHS dietitian for support with this diet.

Alternatively, you can watch IBS webinars produced by specialist NHS dietitians on the NHS Patient Webinars website or search the BDA’s directory to find a private dietitian for you.

If dietary changes and medication have not helped your symptoms, you may find it useful to trial hypnotherapy or cognitive behavioural therapy (CBT).

IBS is not caused by food allergy. If you feel that you may be suffering with a food allergy, please refer to Allergy UK or Anaphylaxis Campaign for further information.

BDA partners up with Barnardo’s on major food insecurity project

Following a plant-based diet whilst having IBS

What are the difficulties for autistic children at mealtimes?

Food Fact Sheets on topics in this sheet including Allergy Testing and Probiotics can be downloaded at www.bda.uk.com/foodfacts

This Food Fact Sheet and others are available to download free of charge at www.bda.uk.com/foodfacts

This resource has been produced in partnership with Dietitians Yvonne McKenzie, Liane Reeves and Marianne Williams.